So a couple weeks ago we setup our christmas tree. I set it up on a monday so the whole family could decorate it when Stacy and Greyson got home from school. Lucy was VERY interested and kept me on my toes for most of the job. After making quite a mess with the christmas decorations something amazing happened. Lucy began to help me! Now this might not sound like anything amazing to you, but she literally started walking across the living room, picking up a branch, bringing it to me, walking back and getting thee next one. This went on until the tree was finished. She would be back with the next branch exactly at the moment I was finished spreading out the last one and hooking it to thee tree. Such an amazing time. Before you think she”s perfect let me just say the help she gave in the kitchen was……a little less than desirable. 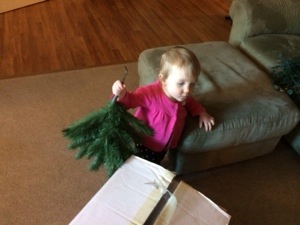 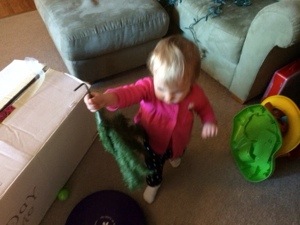 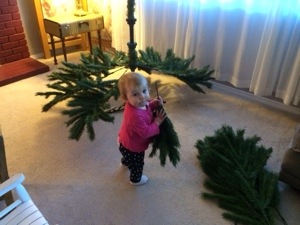 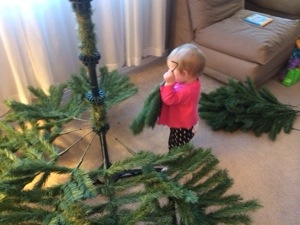 This last week Greyson, Lucy, and I went to our local SEPAC Christmas Party. Lucy and Greyson had a blast and it was fun for me to watch them enjoy themselves. They even took a great picture of Lucy and me. 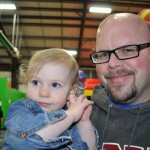 Not only did they get to play, but the kids received several gifts and even got to take a picture with Santa himself! After giving Lucy her candy cane we finally got a picture of her where she was not screaming! 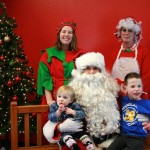 This year for thanksgiving we loaded up the car and headed to Idaho to spend time with family. The kids did great with the long car ride (probably better than their parents) and we arrived safely without issue. 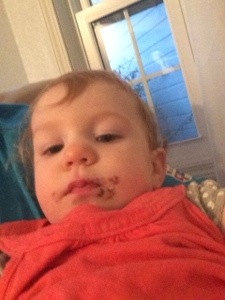 Lucy LOVED being around family, and as you can see she loved the food as well! She ate so much she had belly aches almost every night. While that part was not that exciting she was so cute as she would go around interacting, and basically begging, food from everyone.

Greyson had a great time as well and enjoyed interacting with his aunts, uncle, cousins, grandma Terry, and Grandma great. 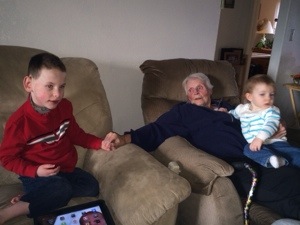 Lucy-Jo showed off her technical prowess while there by using my cell phone (which is pass code locked so you can’t use it without entering the pass code) to call her grandma Terry. Grandma Terry had just told Lucy to use my phone to call her, and within a couple minutes my mom’s phone was ringing. As somewhat of a geek I was so proud, and deeply concerned that my one year old could somehow bypass the pass code settings and make a call. I guess I should be happy it wasn’t to 911.

Yes another milestone has been achieved. Greyson lost his first tooth last Sunday morning. He didn’t say anything but was doing something weird with his mouth which drew Stacy’s attention to the missing tooth. 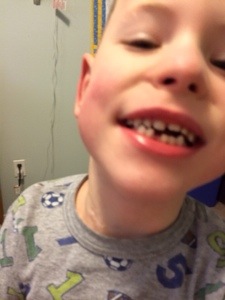 Thankfully we found the tooth and Greyson was able to put it in his tooth ferry pillow Grammie Jo made for him. 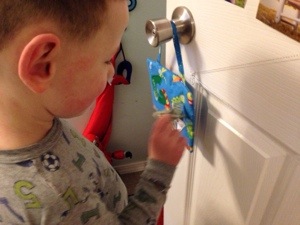 That night the tooth ferry visited and left Greyson $2.50!! Inflation is terrible. Greyson really enjoyed spending his money at the dollar store and bought an Elmo book as well as some cool spy sunglasses. The next day while coming out of his room to complain (he was upset that Lucy had turned off the compute and I turned it back on) when I noticed he was once again missing a tooth! Yep another one had fallen out. 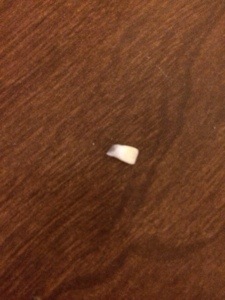 eagle eye dad found that one as well and on e again money was found in the pillow the next morning.

Yesterday we went to a birthday party that included time in the pool.  We took Lucy and Greyson and had a great time.  This was Lucy’s first time in a pool and from the sound of her squeal she enjoyed it!

Yes we’ve been MIA for awhile (Ok maybe a year is more than awhile), but the Westfall’s continue to live.   We had some technical difficulties that have been taken care of and we are once again up and running. In the reboot we were unable to backup the blog so hopefully we will have the old content (or a lot of it) back online before too long.  Whatever happens with the old, enjoy this video and check back as we will begin updating this page again soon! 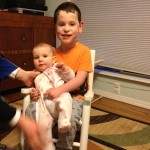 Lucy is a pretty good sport with lots of things.  She doesn’t mind us posing her for pictures like this one with her brother.  She doesn’t mind tagging along with us on lots of adventures and is very easy-going.  She easily rides along in the baby carrier and seems content to just take it all in.

We need to get much better about posting stuff again. Lucy is growing up so fast! Here is a video of her doing her tummy time. She is three months old as of yesterday and doing pretty good with the tummy time…that is until she gets tired of it!

Date Day.
November 5th, 2012
I know we haven’t posted much lately, and hopefully we will get some stuff on here soon as both kids are making us smile everyday. Today we left them at home (figuratively they were actually at a babysitters, we are not that bad of parents!) and went to Seattle on a day date. Stacy took me to see King Tut for my birthday. We can’t show any pictures (they aren’t allowed) except this one. It was a great day with an amazing lady! 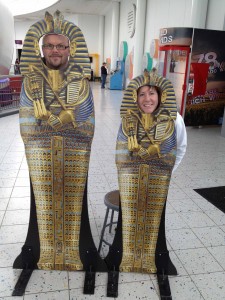 Learning to love each other.

Tonight we let Lucy lay on Greyson’s couch with him and for the most part we met with success. Greyson gave her a little tickle, a “hug” (middle picture, if you’ve never hugged Greyson it is often like this), tapped her softly on the head…..then harder….then harder….then we made him stop. Tickling soon gave way to pinching her cheek (which is so cute it just begs to be pinched)….until he was pinching too hard and we made him stop. All in all it was a very sweet moment and the best he has done with his sister laying right with him.

We continue to settle in to our new routine. Greyson is doing better on the bus (he rides the bus from his school to the baby sitters three days a week).

This is a picture of his first day riding it. He did great until he took my hand to step up on the curb. Then he lost it and cried for about 20 minutes. The second day was about the same (only he cried with the baby sitter as I wasn’t there). Then on the third try they called me to come get him at school. He was melting down so much they were scared he would gag himself if they made him ride the bus.

Since then we have had three successful days, today there was no crying at all. Of course these last three days one of his teachers have ridden with him but I think we are almost to a place where he will be able to ride alone. He’s just growing up so much.

Lucy continues to grow and is getting some head control. On monday I laid her down on the floor for her workout (tummy time) and she not only turned her head to the other side but she also spun herself almost 180 around. It was pretty amazing.

Well that’s all for now. Thanks for checking in on us!